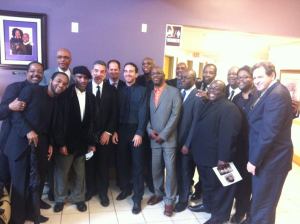 You gotta get your mind right before you attend a funeral: getting up that morning and knowing that part of the intent that day is to bury someone. The first, second and third things on your mind; all during the drive to the location of the ceremony. You’re there now and you have to get out of the car and walk into the building, not having any idea who or what you’ll see first. Funeral jitters.

It was unreal. I was kind of okay until I entered the church and saw Nat Reeves with tears in his eyes and – of course, crying is contagious. A compilation of a few of Mulgrew’s recordings was playing softly. The coffin was opened and I could see him, even though I knew that wasn’t really him. The stark reality of it all was, again – unreal. There was so much confusion as to exactly what was going on during the 4 days Mulgrew lay in the hospital, which didn’t make the anxiety of exactly how to respond any easier to endure. Yet, there was a horrible sense of the inevitable. But, the news of his death wouldn’t be as shocking as the funeral itself.

In the 2½ hours we droned through the observance, there were two awkward moments that, fortuitously, were quite necessary to take our minds off of the fact that one of Jazz’s greatest warriors was cut down on the battlefield. The first snafu occurred about halfway through the service, when one of the church officials introduced the playback of a live-recorded version of Mulgrew’s poignant Farewell to Dogma:

“And now, we’re going to have a CD by Mulgrew Miller entitled ‘Farewell, Dogman’.”

Now, as sad as we all were, we were ruined by that. But, it didn’t stop there…not by a long shot.

Most of you will know that a “homily” is a sermon delivered in a shorter amount of time than in a regular church service. In the context of a funeral, a homily briefly summarizes the life of the deceased. This particular homily did neither. Retired (or so we thought) pastor Dale Lind embarked upon a stroll down memory lane starting with the late early Jazz guitarist Lawrence Lucie, stumbling upon a minor treatise on candle ashes, finally wrapping up his 25-minute meander with a digression on The Wizard of Oz. With every passing minute, tears of sadness turned into tears of smothered laughter – some, barely controlling themselves. Someone’s cell phone kept ringing – I swore it was Mulgrew calling to shut it down. Ironically, the funeral was mildly indicative of how I used to see Mulgrew operate in minor conflicts – quietly letting the situation yield to its inevitable conclusion.

In addition to making us delve into a deeper level of feeling, great art inspires us to ascend to a higher level of consciousness. Hence, Mulgrew’s life embodied an immaculate painting or musical masterpiece. His music made us think, his words made us smile, his neglected career profile made us angry, and his death made us cry. But, the sum and total of him should make us appreciative and glad that God loaned him to us, even if just for a short while. Mulgrew motivated us towards human betterment, but without him here in the physical, the Jazz scene is gonna have one hell of a time staying on point. Grown men cried in front of each other and hugs grew stronger and lasted significantly longer. Some said, “Let’s keep in touch, bro,” – but won’t. Some said, “Man, we need to get on that bandstand!” – but, won’t. Business as usual will resume and then we’ll see each other again at the next cat’s funeral – or our own.

If I could siphon a single word from this whole ordeal, it would be “live.”

9 thoughts on “MILLER VARIATIONS (III): A Glance at Mulgrew Miller in Three Parts”